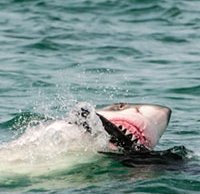 Due to a growing seal population in the dark, cloudy waters off the coast of Cape Cod, Massachusetts, experts think that the peninsula could become a hotbed for great white sharks. Less than 20 years ago, a shark sighting off the east coast, let alone as far north as New England, was rare.

Nonetheless, they're here now and scientists are trying to figure out exactly why and how many of them there are. As is often the case with marine animals, taking stock of how many individuals occupy a given area is immensely difficult, but made even more difficult by the fact that these Cape Cod carnivores are very elusive creatures.

Despite increased numbers of sightings in areas such as Cape Cod, it isn’t clear if sharks in general are doing well or on a fast-track to extinction. An Australian statistician, Aaron MacNeil says that “Yes, there is a historical depletion of white sharks. But the story is not that they are going extinct. The story is that they are probably increasing very, very slowly.”

Photo by @BrianSkerry A Great White Shark swims through a school of jacks in the waters off South Australia. New research is revealing fascinating and complex lives of this dominant apex predator species of shark. One study reveals that white sharks live well into their 70s, which is longer than previously believed. What wisdom might a long lived animal that travels thousands of miles each year possess? And as with all predators, their value is substantial for the health of the worlds oceans. Coverage from an upcoming story in @natgeo about great white sharks. @thephotosociety #sharks, #australia #predators #sharklove #photooftheday

A photo posted by Brian Skerry (@brianskerry) on

It isn’t obvious that they don’t need our protection, however, and attaining a greater understanding of the creatures and being able to capture imagery of them is of critical importance. Therein lies the challenge for National Geographic photographer Brian Skerry. He had to employ a seal decoy, drone and an airplane over the course of months to get an up-close view of a great white shark off the coast of Cape Cod.

As of right now, residents of Cape Cod have been welcoming the resurgence of sharks. However, while the last fatal shark attack in New England was eighty years ago, there have been an increasing number of close calls.

National Geographic asks, “…It may be that great whites today are hanging over the abyss of extinction…will we look past our fear and reach out a hand to this creature?” The sea has been their home for roughly 16 million years after all, and we still understand so little about them.

To see more of Brian Skerry's work, visit his website and follow him on Instagram. You can also watch the TED talk below that Brian gave about the challenges associated with shooting above and below the ocean's surface and his motivations for doing so.