Previous Story “Stop” wasting time when dialing in your exposures at night with this simple tip from Karl Taylor
Next Story Smarter, faster and integrated: Adobe updates Creative Cloud software for 2016 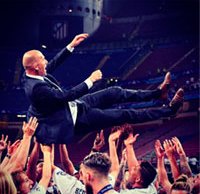 When you’re photographing an important event like the UEFA Champions League final between two storied franchises Atletico Madrid and Real Madrid, it can be a stressful assignment. There might be only one chance to get the definitive shot of the event and everything happens so quickly. Nikon Europe Ambassador Joel Marklund described covering the event as “all a big mess.”

In addition to the difficulty of getting a great shot, you need to best the other 160 or so photographers that are all trying to accomplish the same feat. You’re competing against the speed of the game, your peers and at least to some extent, yourself.

As is the case with real estate, sports photography depends upon location, location, location. Agencies such as AP, Reuters and Getty typically get the best spots and there is a ranking system in place that dictates where you’ll end up for the match.

A photo posted by Joel Marklund (@joelmarklund) on

For an experienced pro like Joel, he’s always trying to think ahead during the game and predict which team will win, which therefore dictates where he wants to be located when the final whistle blows. Marklund has many tips on sports photography, so be sure to check out the full post at I Am Nikon for much more.

Gear is very important for a sports photographer. In addition to the Nikon D5 that Joel primarily shot with during the match, he had three Nikon D4S bodies (two of which were set up to be remote cameras) and a Nikon D4. Lenses included the Nikon 14-24mm f/2.8G, Nikon 24-70mm f/2.8 and Nikon 400mm f/2.8G ED VR.

A photo posted by Joel Marklund (@joelmarklund) on

Joel Marklund is a relatively new addition to Nikon Europe’s Ambassador program. You can read more about the program and Joel here. Visit his website to see more of his work and follow him on Instagram.

If you’d like to see some nice soccer photos shot with the Nikon D5’s biggest competitor, check out our own Wililam Brawley’s images in the Canon 1DX II gallery.

(Seen via The Digital Picture. Index image via Instagram.)

Tweet
Comment
Previous Story “Stop” wasting time when dialing in your exposures at night with this simple tip from Karl Taylor
Next Story Smarter, faster and integrated: Adobe updates Creative Cloud software for 2016