Making waves in 4K: Sony artisans travel to Nicaragua with the A6300 and Action Cam 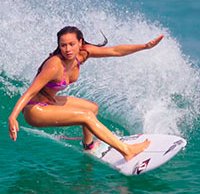 The 4K video, which you can see below, was mostly recorded using a Sony A6300 with a Sony 20mm f/2.8 lens. Rogel handled the majority of the in-water shooting with the A6300 in underwater housing, which offered him a much smaller, lighter setup without the bulk of a DSLR.

"I've had a other cameras in underwater housings in the past and they were big, clunky and [have] expensive housings... They were much bigger and much heavier," Rogel said. "The A6300 setup was awesome. It was easy to swim with and use in the water."

In addition to the A6300, the team also utilized a 4K Sony Action Cam. The subject also became a videographer with Tia recording 4K footage of herself surfing using the Action Cam. Check out the final video below and be sure to watch it in 4K.

For more information on the project, see this article at Alpha Universe. Visit David McLain's website and Gabe Rogel's website to see more of their work.

You can also check out a behind the scenes look at the video below.

If you're curious what as in Gabe Rogel's camera bag for this shoot, you can see for yourself in this video below: