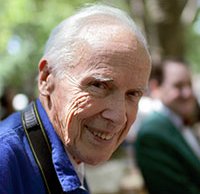 Bill Cunningham, a fasion and street photographer perhaps known best for his work for the New York Times, passed away Saturday in Manhattan at the age of 87 following a recent stroke.

Cunningham worked for The Times for nearly 40 years, capturing an extensive library of images that when viewed together create a rich visual history of New York City and its people. Much to his trepidation, Cunningham's success and eventual celebrity status got in the way of his work, blending in and searching for subjects on the streets.

Despite his artistic success and numerous honors and awards bestowed upon him, Bill Cunningham lived a simple life. As the Times says, "Asceticism was a hallmark of his brand…He slept on a single-size cot, showered in a shared bathroom," and even tore up checks over the years from other publications. Refusing even water at the innumerable galas and events he photographed, Cunningham worked his entire career as something of an outsider to the often glamorous world he photographed.

Bill Cunningham lived his life as an artist obsessed with capturing the personal style of people from all walks of life. He was a man who refused nearly all of life's luxuries in pursuit of what he believed in. New York City will not be the same without him, but the fashion and personalities he pursued and chronicled for so many years will live on through his work.

I urge you to read the New York Times story about Cunningham's passing. You can see more of his work here and enjoy the videos below seen via ISO 1200.