Previous Story First-person photography: Become a wet plate collodion photographer in this cool video
Next Story Power up Lightroom with presets: Everything you need to know about Lightroom presets 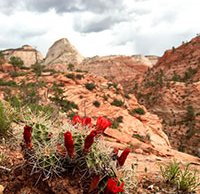 As we inch ever closer to the centennial of the National Parks Service, punishment has finally been handed down to self-proclaimed artist Casey Nocket. If you don't know who this is, she defaced seven national parks in 2014 through the use of acrylic paint. You can read a bit about her crimes here.

Her vandalism included her Instagram handle and were posted and shared on social media. Her court case has been ongoing for quite some time but last week U.S. Magistrate Judge Sheila K. Oberto sentenced Nocket -- who had pled guilty to seven misdemeanor counts -- to a two-year ban from all National Parks (and other federally administered land), 200 hours of community service and an undisclosed fine. The US has a lot of federally-protected land; the 23-year-old New York native is now banned from 20% of the United States.

Nocket's accounts have long since been deleted -- although regularly replaced by imposters -- but nothing ever truly disappears from the internet, including her declaration, "It's art, not vandalism, I am an artist." I suppose that it's possible that Nocket may have had good intentions, but they were very poorly brought to life. Any message she might have been trying to convey pales in comparison to the damage she caused.

A photo posted by Zion National Park (@zionnps) on

The National Parks are an incredible natural resource that deserve protection and unfortunately some of Nocket's damage may never be able to be completely removed. Do you think that the punishment fits the crime? Let us know in the comments below.

Tweet
Comment
Previous Story First-person photography: Become a wet plate collodion photographer in this cool video
Next Story Power up Lightroom with presets: Everything you need to know about Lightroom presets