Previous Story Raw editing on the road: Lightroom for Mobile updated for both iOS and Android
Next Story Durable construction, classic styling: Peak Design’s new Everyday bags promise the best of both worlds

Mayday! Drone takes a bullet and plummets to its untimely demise 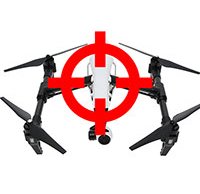 Imagine that you're flying your new DJI Inspire 1 drone. All of a sudden you hear loud bangs and your drone comes crashing down. Photographer and filmmaker Toby Harriman recently experienced this nightmare scenario over the fourth of July in Aspen, Colorado.

According to Harriman, he was carefully and legally flying his drone at night preparing to shoot the big fireworks display. He flew it above an opening between a pair of houses and heard two loud bangs before his drone plummeted to the earth. At first Harriman thought that maybe he had terrible luck and somehow his drone had been struck by a firework. However, upon inspecting the remains of his Inspire 1, it was clear that it had been struck by a bullet.

Rather than approach the potential culprits at night when they were definitely armed and possibly intoxicated, Harriman opted to cut his losses and deal with it the next morning, including searching for his camera, which he couldn't find among the wreckage in the dark.

Harriman is a responsible drone pilot who is very familiar with the rules and regulations and always errs on the side of caution, but he wonders if he shouldn't have flown his drone anywhere near the two houses. However, even if a person felt like their personal space or property rights were being violated, using a weapon to destroy someone else's personal property and create a risky situation is absurd. Harriman filed a police report but isn't hopeful that the perpetrator will ever be brought to justice. This incident is yet another in a series of events that showcase how drone pilots -- even the responsible and careful ones like Harriman -- can find themselves at odds with other private citizens. It's a different world now with drones, but it doesn't need to be a worse one where people are shooting drones out of the sky.

For much more information on this incident and many images of the damage sustained by Harriman's Inspire 1, make sure you read the full story at Resource Magazine. To see Toby Harriman's work, check out his website.