Previous Story Sony A7S cranks up the ISO to capture video of rocket reentry over the Alabama Hills in California
Next Story Creating a story: Elinchrom takes us behind the scenes of high-concept portrait photography

Fujifilm delivers another blow to its namesake: Phasing out film multipacks, Fujicolor Pro 160 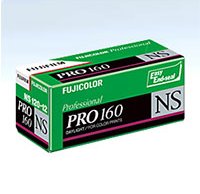 While there are many people working hard to keep film alive -- after all, it might make you a better photographer -- it is still the case that in general, it's a market in decline. In many areas, long gone are the days of easily finding film itself, let alone places to have it developed.

Film's proponents maintain that it's still a supported format, but companies continue to reduce manufacturing of film products and cease production of more and more products entirely. Over the weekend, Fujifilm Japan announced further reductions to its range of film products. The cut mostly affects multi-packs of certain films rather than the films themselves, but as Japan Camera Hunter points out this will inevitably price some consumers out of film as they will no longer have access to the cost-saving bundles. The affected films are: Superia 400, Superia X-Tra 400, Superia Venus 800 and Natura 1600. The production of multipacks will be stopped by this coming December, but it would not be surprising if a run on them by frugal photographers eliminates them from inventory before then. Large format photographers received worse news from Fujifilm, however, as Fujicolor Pro 160 sheets for both 4 x 5 and 8 x 10 formats will be discontinued entirely without a replacement in sight. Once production of the sheet films ends in August and September, the remaining stock with be the last and Japan Camera Hunter expects them to go quickly.

There continue to be film options for consumers, but as product offerings become slimmer, it stands to reason that prices will begin to increase. As costs go up, more film users will likely make their way to digital and when film sales inevitably decrease, more products will be cut. I know the "film is dead" rhetoric has likely worn thin, but film can only take so many punches before it hits the mat. One day it might not get back up.

Tweet
Comment
Previous Story Sony A7S cranks up the ISO to capture video of rocket reentry over the Alabama Hills in California
Next Story Creating a story: Elinchrom takes us behind the scenes of high-concept portrait photography