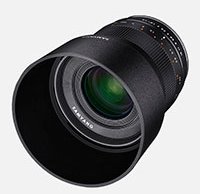 As part of their five lenses in five weeks launch event, Samyang has announced two new 35mm lenses, both of which are designed for mirrorless cameras with APS-C sensors.

While we haven't tested this ourselves, Samyang promises a sharp image across the frame with minimal aberrations thanks to their proprietary Ultra Multi Coating. The mirrorless camera lens will be available in Sony E, Micro Four Thirds, Fujifilm X and Canon M mounts in September for €449 (which is around US$500, but official US pricing is not yet available). Videographers will be more interested in the 35mm T1.3 AS UMC CS lens, which differs slightly from the 35mm f/1.2 optic above. The cine lens version has focus gear rings and a declicked aperture and is optimized for professional focus follow systems. The lens also includes distance scale and T number markings on both sides of its body. The cine lens will be available in September for €499 (just under US$560, but again, official US pricing is not yet available). Notice the physical differences between the Samyang 35mm T1.3 AS UMC CS lens and the stills photo lens up above.