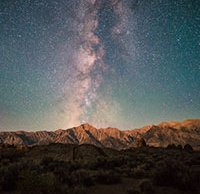 Lonely Speck's Ian Norman was recently out doing night photography in the Alabama Hills in California and witnessed a massive fireball streak across the night sky. Not one to miss an opportunity to record something cool, Norman grabbed his Sony A7S and recorded video of the then unknown object.

As it turns out, the fireball was actually the upper stage of China's CZ-7 rocket reentering earth's atmosphere. It was an expected reentry and it was reportedly sighted in five different states.

You can see Norman's video below. Considering that it was pitch black, the A7S managed to do a very good job documenting the neat event!
Warning: The video below contains profanity.

That wasn't the only cool thing that Norman captured that night, as he also made an excellent image of the Milky Way over Lone Pine Peak with his A7S and a Zeiss 18mm f/2.8 lens, which you can see below.

Milky Way over Lone Pine Peak. Diana (@northtosouthtravel) and I were out last night with @lance.keimig and more friends shooting some night photography. Got to witness the re-entry of the CZ-7 upper stage and got some great photos of the Milky Way with the new Zeiss 18mm/2.8 Batis. Captured this one just before leaving as the crescent moon started lighting up the Eastern Sierras. Pretty awesome night! Sony a7S, Zeiss Batis 18mm, f/2.8, 15s, ISO12800, stack of 8 exposures. #lonelyspeck #milkyway #nightscapes #alabamahills #easternsierras

A photo posted by Ian Norman (Lonely Speck) (@inorman) on

You might recognize Norman's name, he recently made a video about utilizing an overnight flight to capture images of the Milky Way. Like I said, he's not one to miss opportunities.

To see more from Ian Norman and others, be sure to visit Lonely Speck, and to read more about the low light gathering Sony A7S, please see our review!