No gold medal for this criminal: Photographer who was robbed of $40k in gear in Rio finds thief 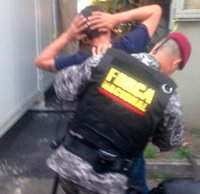 Photographer Brett Costello had his carry-on luggage packed with $40,000 worth of camera gear cleverly swiped shortly after arriving in Rio last week. The elaborate heist involved multiple people and was well planned out. However, one of the thieves wasn't intelligent enough to not wear one of Costello's jackets that he stole.

In what is best described as a massive security failure on the part of personnel on-site at an archery event, the thief walked through security into the event without proper credentials. Coincidentally, Costello was there too and recognized his jacket. He alerted the authorities and the thief was brought to justice as he sat in the press box. You can view the video in this article.

As a reddit user points out, this incident emphasizes the importance of insuring your camera gear and also utilizing LensTag. You can download LensTag for Android or iOS, sign up, add all of the gear you want to protect (with serial numbers and photos of the gear) and your equipment will be more likely to be recovered in the event of theft. Best of all, it's free, so go check it out!