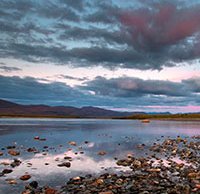 Longtime friends and travelling companions Jim Slinger and Andrew "Tip" Taylor enjoy spending time on rivers. Over the past 40 years, they've shared about two years on Arctic rivers in particular. And now, over 30 years since their last trip down the Noatak River in Alaska, the duo made their return. Although both are over 70 years old, they show no intentions of slowing down anytime soon.

The Muir Project accompanied the pair on their trip as they recalled their adventures in life and took in the beautiful, untouched vistas of northern Alaska. The short film below was shot by Jason Fitzpatrick, Jen Serena and Ric Serena using Canon 1D C cameras.

Speaking to Fstoppers, Ric Serena said that managing weight proved a particular challenge when making the film. Supplies had to be dropped off by plane over multiple days, and even with these numerous supply drops, the team still needed to make some difficult decisions on what to bring with them. Support for internal 4K capture was a priority, which is why the Canon 1D C was ultimately selected for the project. However, the camera's 1 minute file size limit was problematic, requiring stitching longer interview footage together during the editing process. Check out the film below, and be sure to watch it in 4K resolution if you can.

For more behind the scenes information and images, see the Fstoppers article. It's an inspiring film, and you can tell how passionate Jim and Tip are about traveling and exploring rivers and mountains. Even at 73 and 77 years old respectively, they continue to follow their passion.

To learn more about The Muir Project, visit their website.