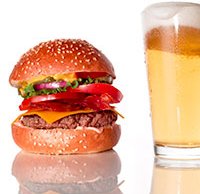 You might think it's simple to make a great-looking burger shot, but it really isn't. Steve Giralt is not only a talented commercial photographer, but he's also a visual engineer. What this basically means is that he comes up with creative solutions to problems. In this case, the problem was how to make a slow motion video of a burger being put together. The solution? A Phantom 4K, high speed motion control robot and ingenuity.

The ketchup and mustard were thrown into the air using a 3D-printed two-sided catapult. The bun, condiments, toppings and burger all had to fall down onto the bottom bun. With the components starting from different heights, this was tricky. The open-source Arduino computing platform, along with a lot of planning and various bells and whistles, allowed Giralt to come up with a repeatable, consistent solution. After three or four takes, the burger nailed its landing.

This was the first food shot I've seen that utilized elastic bands and a robot arm, but those are the kinds of tools you sometimes need to use to get the best -- and most delicious-looking -- results. You can get a behind the scenes look at the video below and the final slow motion shot follows right below it. Don't forget to watch it in 4K.

I don't know about you, but those videos made me hungry! You can see more of Steve Giralt's work at his website.

An interesting note, my colleague William Brawley observed that the moving camera used in Giralt's video is very similar to The Marmalade Spike camera, which you can check out here. Very cool technology!