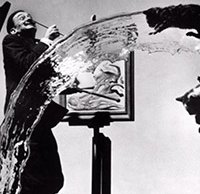 Long before Photoshop, portrait photographer Phillipe Halsman and surrealist painter Salvador Dalí collaborated many times after they first met in New York City in 1941. Interestingly, the two had both lived in the same Parisian neighborhood during the 1930s, but never formally met. After working an opening of a Dalí exhibit and then photographing some of the painter's costumes for another job later that year, they began what would become an intense 37-year collaboration.

Aiming to emulate photographically the surrealism that Dalí's paintings were renowned for, Halsman was often faced with challenges he had to creatively overcome. This was in an era when hopping on a computer and creating composites was not yet even a dream, so creating physical solutions to allow for everything to exist in a single frame the way it existed in Halsman and Dalí's minds was essential.

In 1949, Dalí made "Leda Atomicus," a work which represented an important shift in direction for the Spaniard. He started to incorporate discontinuity and suspension, thinking more about the atomic structure of the world, desiring to reflect the modern age, which he considered the "atomic age." The video below gives a behind-the-scenes look at Halsman's portrait "Dalí Atomicus" and reveals that the portrait took 26 attempts to get right.

[NSFW content warning: The video below contains some nudity, and so may not be considered suitable for viewing at work.]

It's interesting to consider the efforts required to create your photographic vision before Photoshop, especially surrealist photography like the collaborations between Halsman and Dalí. Two incredibly gifted artists combined their distinct skills to create lasting, timeless images in an era when their ideas were challenged by the realities of the time.