Stalkers or photojournalists? On the job with a pair of Hollywood paparazzi as they chase down celebs 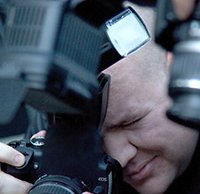 Paparazzi photography elicits many strong emotions when people see it. Is it criminal stalking or is it a form of art? Perhaps instead it's just people doing a job, a business created by society's insatiable desires to get inside the lives of the rich and famous. Whatever it is, Elite Daily followed two Los Angeles-based paparazzi for a week.

[NSFW content warning: The video below contains some explicit language and content, and so may not be considered suitable for viewing at work.]

Paparazzo Rick Mendoza says television often portrays a paparazzo as a villain, "because it works." His colleague Keith Johnson remarks that what they do isn't stalking because they follow celebrities around for their job, not due to some obsession. But for Mendoza, it actually is more than a job, it's a lifestyle and it's his life. He does it for the money, yes, but also because he wants to make history with his images. Elite Daily writer Ethan Levine even tries his hand at the craft under the guidance of Mendoza and Johnson, however he found out that it's a tough gig, having captured blurry shots of a brick wall rather than Ozzy Osbourne and accidentally antagonized a rival photographer.

Not unlike wildlife photography, paparazzi work can involve staking out an area and waiting for the subject to come to you. Similarly, sometimes the opportunity for the perfect image is very short and you have to be prepared for it. However, a crucial difference is that unlike a good wildlife photographer who tries to blend in and not disturb the scene, a paparazzo does not always want to blend in, but instead often antagonizes in hopes of getting a better shot. Image by Flickr user Yahoo! and used under Creative Commons 2.0. Image has been modified.

Compensation for photos varies a lot, as does the challenge involved in capturing shots. Some celebrities just accept the paparazzi, give them a little wave and play along. Others despise having their photos captured as they go about their lives and work to create various obstacles for the photographers. It can certainly become a game of cat and mouse.

(Seen via ISO 1200. Index image by Flickr user Todd Huffman and used under Creative Commons 2.0. The image has been modified.)