Sony A7S II cranks the ISO up to 25,600 to record aurora in real-time over Iceland from DJI drone 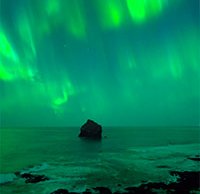 How about some aurora to get your week started off right? Flying over the Reykjanes Peninsula in Iceland, native photographer Oli Haukur captured beautiful footage of the northern lights with his drone.

Contrasted against the stark Icelandic landscape, the vibrant green bands dance across the sky. Even with a bright moon in the sky, the colors still pop from the screen and reflect off the cold Atlantic waters of Iceland's jagged coast.

While short and sweet, the 4K video below is worth watching a few times over. Ozzo shot the footage using a Sony A7S II with a Sigma 20mm f/1.4 DG HSM Art lens attached to a DJI Matrice 600 Hexacopter. It's an expensive kit -- totaling around US$8,500 at current prices -- but the results are excellent.

"When you're shooting northern lights with a drone, you are racing time. They appear and fade out quickly, so preparing the drone and getting all the settings correct in record time is crucial!" Haukur told PetaPixel. The camera was set to a 1/25s shutter speed at f/1.4 with an ISO sensitivity of 25,600 and the white balance set to 4800 Kelvin.

While stunning, the video above is actually test footage. Next March, Oli and the rest of the team at OZZO Photography hope to release a longer video of aurora footage captured using drones. I'll definitely be keeping my eyes peeled for that next spring.