Previous Story Speedlights vs Studio Strobes: Which is best depends on what you want to do with the light
Next Story Unique 10mm optic for E and M mount: Voigtländer 10mm f/5.6 lens available for preorder

Hasselblad X1D delayed: The backordered camera will be releasing slightly later than expected 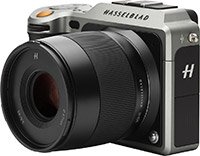 The Hasseblad X1D-50C was originally slated for a release in late August or early September, but that has been knocked back to mid-September according to B&H Photo. Adorama does not list a release date on their product page for the camera.

It seems that delays are becoming more common. While reasoning for the delay was not disclosed, we believe that the X1D utilizes a Sony medium format CMOS sensor as its sensor exactly matches the specs of Sony's 50-megapixel MF sensor. And as we all know, Sony's sensor manufacturing plants were severely impacted by the Kumamoto earthquakes. The natural disaster continues to send ripples throughout the camera industry.

In Eamon Hickey's hands-on with the X1D in late June he noted that many features were missing in the pre-production firmware, including the touchscreen menu system and the autofocus system. The launch event was not very long ago, so perhaps Hasseblad wants a bit of extra time to tie up any loose ends with the camera as well. This is all speculation, but it remains the case that the camera will definitely miss its original late August/early September release date. According to the President of Hasselblad Bron, Inc., the distributor for Hasselblad products in the US, 2016's allocation for the US sold out on the first day of sales, which means that every X1D which will be imported here this year has already been ordered. If you want to get your hands on one, you will want to place your order as soon as possible. You can preorder through the links below and help support our site.

Stay tuned to Imaging Resource for additional coverage on the Hasselblad X1D as we near its release. The first mirrorless medium format camera is sure to make waves as it starts making its way into users' hands.

Tweet
Comment
Previous Story Speedlights vs Studio Strobes: Which is best depends on what you want to do with the light
Next Story Unique 10mm optic for E and M mount: Voigtländer 10mm f/5.6 lens available for preorder