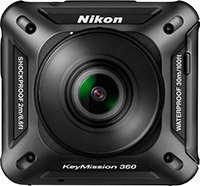 Nikon has today announced three KeyMission cameras, including the KeyMission 360 that it briefly teased during CES in January. The trio of action cameras are differentiated not only by their features, but by their lenses and imaging sensors.

The KeyMission 360 is the flagship KeyMission camera, offering a full 360 degrees of video and stills recording. It uses two 8.2mm equivalent f/2.0 lenses and dual 21-megapixel CMOS sensors to record immersive stills and 4K UHD video. Without a built-in display, you have to use the official SnapBridge 360/170 application for Android and iOS devices. You can read more about the waterproof, dustproof, shockproof and freezeproof action camera here.

With a single lens, the KeyMission 170 records 4K UHD video and 8-megapixel still images with a 15mm equivalent  f/2.8 lens. The camera has a 1.5-inch display and is compatible with the SnapBridge 360/170 app as well. Learn more about the POV-oriented action cam here. From left to right: Nikon KeyMission 360, KeyMission 170 and KeyMission 80 cameras. Cameras not to scale.

Rounding out the lineup is the 1080p KeyMission 80. The compact 80 is designed to be mounted to the user's body and includes a 25mm equivalent f/2.0 lens on the front and a 22mm equivalent f/2.2 lens on the back for capturing 5-megapixel selfies. Ease of use is a focus with the KeyMission 80, as it can be used one-handed and also automatically turns on when removed from the included camera holder. If you want an action camera for recording your adventures without a hassle, read about the KeyMission 80 here.

All three KeyMission cameras (360, 170 and 80) will be available in October and cost around US$500, US$400 and US$280 respectively. There are a number of accessories available for the cameras as well, which you can read more about in our previews, which are linked below.