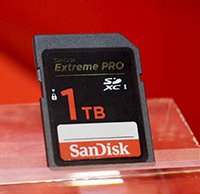 Photokina isn't just about big camera and lens announcements, it also brings with it a wide variety of general technology and photo gear reveals. Western Digital Corporation (owner of SanDisk as of earlier this year) has just announced a prototype SanDisk SDXC card with a massive 1 terabyte (TB) of storage. (You heard correctly... 1TB!)

The card has been designed to "meet the increasing demand for high quality content, for example, 4K and 8K resolutions and the exponential growth of data-intensive production requirements, the company continuously exceeds the limits of technology." To put the 1TB card into perspective, sixteen years ago saw Western Digital releasing the world's first 64 megabyte (MB) SD card and now with SanDisk they are achieving 1TB capacities. (That's 15,625 times the capacity for those of you keeping score at home!)

You may recall that in 2014, before being acquired by Western Digital, SanDisk used the previous Photokina to launch their then record-breaking 512GB Extreme PRO SDXC UHS-I memory card. Now just two years later the almost unthinkinable 1TB card is now nearing the hands of end-users needing massive data storage in a small package.

Although there's a working unit of the 1TB SDXC card in SanDisk's Photokina booth, it is still a prototype and therefore no pricing or availability information is yet available. When we learn more, we'll be sure to let you know!