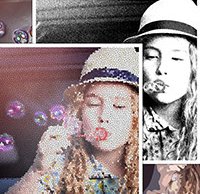 Adobe is releasing two updated applications, but Organizer - which is included within both Photoshop and Premiere Elements - has seen many improvements as well including four primary new features. For owners of touch-enabled computers, Organizer 15 is now compatible. You can tap to find, sort and make quick enhancements to your images. And speaking of searching for files, search is enhanced allowing you to find photos and videos quicker than ever by looking for a file based on places, events and other subjects. These tags you can search for? They're now "smart." Elements automatically tags photos with keywords like "sunset" and "dogs." Instant Fix is enhanced as well, allowing you to edit a batch of photos at once, saving you even more time.

This emphasis on saving you time carries over to Photoshop Elements 15. Rather than having to take the time to find an online tutorial or figure out a certain edit by yourself, Elements 15 comes loaded with 45 "Guided Edits." Guided edits break down a task into step-by-step instructions that lead you through the process and reportedly help you achieve excellent results. There are five new guided edits including: turning your photos into visual text, painterly effect, effect collage, adding motion blur to your action shot and creating custom frames for your photos. Another new feature is easily adjusting facial features, such as turning a frown upside down, making a squinted eye open wide and more. There's also an enhanced filter gallery, allowing you to quickly tweak and fine-tune your photos from a wide array of different filters. Guided Edit isn't just for Photoshop Elements, Premiere Elements 15 adds "Layer Adjustment Guided Edits," which can be applied to individual clips or to your entire movie. Haze removal has made its way from Photoshop Elements and is now included in Premiere. If you've ever been frustrated trying to match an audio clip to a video clip, the new remix feature should ease your frustrations. The software automatically remixes tracks to match the length or your clip or movie and creates natural sound transitions. Smart Trim, Favorite Moments and Pan and Zoom tools now include face detection. If you want to use Premiere Elements 15 to create a video collage, that's easy now with the new video collage feature.

There are some improvements not exclusive to either Photoshop Elements 15 or Premiere Elements 15. Both pieces of software include much easier social sharing to Facebook and YouTube. They also include eLive within the software, providing you with instant access to tutorials to help you make the most of the software. Making a video collage is a breeze in Premiere Elements 15

Photoshop Elements 15 and Premiere Elements 15 is now available with an estimated street price of just under US$100, although current Elements users can upgrade for $80. Or you can buy them both for around $150, netting yourself a savings of $50. Again, current users have an upgrade option, with a bundle available to them for just under $120. To learn much more about the new software, check out the full list of features here.