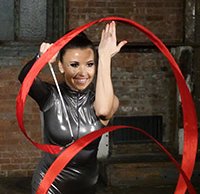 The fifth generation Sony RX100 premium pocket is here, and unsurprisingly named the Sony RX100 V. What is surprising is the performance that Sony has crammed into this premium pocketable camera, including 4K video, crazy-fast 24 frames per second continuous burst shooting and on-sensor phase detect autofocus.

We were able to get a review unit of our own after the press announcement yesterday in New York City. After taking the camera out for a spin on the streets of New York and during a Sony-organized press shooting experience, we now have a selection of real-world gallery photos for you to enjoy!

The lens on the Mark V is the same as the previous version, with a 24-70mm equivalent range and variable yet bright f/1.8-2.8 aperture. The camera is therefore quite versatile not only with regards to the subject matter you can photograph, but it also handles a wide array of lighting situations quite well. We're on our way back down to IRHQ now, with the RX100 V in-hand. We are, of course, eager to get this camera into our lab to fully test its image quality and see if its impressive-sounding performance specs pass muster. One quick note on performance I can say is that the 24fps high speed burst rate is absolutely insane and is blazingly fast. When shooting JPEG files in particular, the camera chews through images frame after frame. Buffer depth seems fantastic. One potential downside to that is that you might need a larger memory card, as the RX100 V will eat through memory in no time with its speedy performance!

While we work on putting the RX100 V through our lab, head on over to our RX100 V gallery page to view and download full-resolution sample shots from our shooting experiences in New York City.