Painting with light: Brian Hart’s photography turns his camera into paper and light into a pen 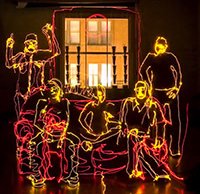 Brian Hart's photography is a fascinating melding of photography and drawing. His light painting work has been widely featured on a number of occasions, including international exhibitions. Maria Bartholdi recently produced a video about Brian and his work, which you can see below.

"Light is a really unique medium to work with. It's this non-physical thing. You can't see where you've drawn, it's not tangible, it's kind of like you projected out there and hopefully you end up with something good," Hart says in the video's opening. As a light artist, Hart considers light his pen and his camera his paper. Whereas most visual artists who use cameras consider their camera and lens their primary tool in creating artwork, Hart considers light his tool and his camera is the means for recording his drawings.

Despite self-identifying more as a painter than a photographer, Brian has to be very proficient with his camera gear as his exposures can unsurprisingly be difficult to nail down. His shutter is open at times as long as 20 minutes. Further, when constructing more complex pieces, he can take hundreds of individual frames to composite when creating the final image. He regularly traces the elements in a scene with light, so naturally his compositions are meticulously-planned and thought through ahead of time. It's fascinating to watch him work in the video below.

Brian Hart's work truly takes light painting to the next level. Impressively, his photographic work is all done in camera, what you see is what you get. The LED lights he uses are small, about an inch long, and were originally designed to be placed in bobbers for night fishing. They aren't particularly bright, which means that Brian can draw without appearing in the exposure. Without being able to see where you've drawn can be very challenging. If you leave your light in one area a bit too long, it can ruin the shot.

To learn more about Brian Hart and see his work, visit his website.