Previous Story Some photos before the doors close: a photo walk through the Kodak Factory in Harrow, England
Next Story Avoiding artifacts: Selectively sharpening in Photoshop with Jimmy McIntyre 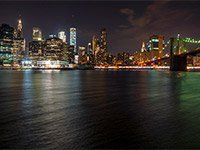 Wake up with IR! Here's today's cup of Caffeine Priority...

I travelled to New York City this past weekend to visit a couple of friends from university. It being my first time in the city and also primarily a social excursion, I didn’t take a lot of photos but I did venture out to Brooklyn to capture some night shots of Manhattan across the East River.

On my last night in New York City, after returning from a show shortly before midnight, I quickly packed my bag and grabbed a cab to Brooklyn Bridge Park in Dumbo. Despite being “the city that never sleeps,” the park and walkway on the bridge were deserted. Fine by me. There was a bit of a breeze and the skies were mostly clear, not bad conditions, but I was hoping that there would be some fast-moving clouds up above. After about an hour of shooting from a handful of different vantage points, my wish was finally granted…for all of about three minutes. It was enough time to grab a few shots, but not enough time to really experiment with different compositions while the sky was good.

Using the Panasonic G85, I equipped the 12-60mm (24-120mm equivalent) kit lens and went to work. It was a great opportunity to test the camera’s low light autofocus (very impressive) and live view performance (also impressive, although there was a fair bit of slowdown in the low light of the real-time feed to both the rear display and the electronic viewfinder). After having my fill of shots from the promenade and realizing just how tired I was and how late it was getting, I packed my gear back up for a late night – or early morning, I suppose – stroll across the historic bridge back to Manhattan where I was staying. The bridge has a lot of suspension wires in the way across most of it that interfere with photos, but I had gone across the bridge with friends earlier and noticed a very interesting vantage that offered a mostly clear view of the traffic below, one of the iconic American flags atop the bridge and the Manhattan skyscrapers in the background. The G85’s tilt swivel screen proved immensely useful in shooting with the camera resting on a metal beam overlooking the roadway below. I took my own gear along with me as well and captured the shot below using a Nikon D800E and Nikon 14-24mm f/2.8 lens. All in all it was a very fun, albeit eerily quiet, evening of photography around the Brooklyn Bridge. I’d love to go back sometime and see if I can’t get more interesting conditions and try out some different vantage points, perhaps from Williamsburg. Look for my full field test of the Panasonic G85, including discussion of the camera’s features and performance, in the near future.

Caffeine Priority is a series of short photo-tidbits to ease you into your day and give us a chance to share a bit more of what life’s like here at IR. We're more like a group of friends testing and talking about cameras and lenses than the buttoned-down, big-corporation world that some of our photo-friends at other companies work in; hopefully, these little snippets will share some of that. So... grab another coffee and join in the conversation with us down below!

crop
Tweet
Comment
Previous Story Some photos before the doors close: a photo walk through the Kodak Factory in Harrow, England
Next Story Avoiding artifacts: Selectively sharpening in Photoshop with Jimmy McIntyre