Touching the future: MacBook Pro slims down, speeds up and gets Touch Bar OLED strip 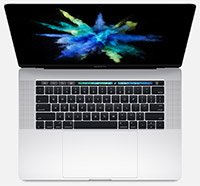 The MacBook Pro has long been a valuable tool for MacOS photographers. However, it has been a considerable length of time without any major refreshes, instead receiving annual speed bumps and minor tweaks. At today's "Hello Again" Mac event hosted at Apple's Cupertino headquarters, the tech giant has finally offered up what is perhaps its biggest MacBook Pro refresh ever.

New Features: Redesigned inside and out

Available in 13- and 15-inch sizes, the new MacBook Pro utilizes Intel's sixth-generation family of processors, including dual-core i5 and i7 processors in the 13-inch MacBook Pro models and quad-core i7 processors in the 15-inch models. The smaller MacBook Pros offer 76% better 3D graphics and video editing than the previous generation whereas the larger models offer 130% better 3D graphics and 57% faster video editing. In addition to faster specs, the MacBook Pros use 2133MHz memory that starts at 8GB in the 13" models (expandable to 16GB) and 16GB on the 15" models. Further, built-in SSD storage now starts at 256GB for all models and comes with an available upgrade up to 2TB. The SSD storage itself has data speeds up to 3.1GB/s, which is up to 50% faster than the previous generation Apple notebooks.

While the internals are a nice bump, the biggest change is the body itself. Thinner than ever, the new MacBook Pro notebook is a mere 14.9 millimeters with a 13-inch display and 15.5 millimeters thin in the 15-inch model, representing a respective decrease in thickness of 17% and 14%. Volume has decreased as well by 23% and 20% respectively. Audio volume, on the other hand, is increased due to an all-new speaker design which includes twice the audio dynamic range of previous models. The Force Touch-equipped trackpad is much larger as well, up to two times larger compared to the previous-gen MacBook Pro models.

You have probably noticed the distinct lack of a function row on the new butterfly-mechanism keyboard (this new keyboard is Apple's thinnest and uses the same technology found in the recent MacBook revision). Instead, the Touch Bar, an OLED touch strip, sits at the top of the keyboard. This allows users to have context-dependent keys at their fingertips. It's easy to imagine the possibilities for different applications, having perhaps your most-used functions available on your keyboard.

The display maintains the same 2560 x 1600 and 2880 x 1800 resolutions for the 13 and 15-inch models respectively, but the displays are said to be of higher quality and be more energy efficient. Specifically, when compared to the previous-gen MacBook Pro, the new display in the 15-inch model is 67% brighter, has a 67% higher contrast ratio and displays 25% more colors. It displays 125% of the sRGB color gamut. Efficiency in general is a focus with these new machines as they offer "all-day battery life" of up to 10 hours for both the 13-inch and 15-inch MacBook Pros. Rather than release an updated MacBook Air, Apple has instead opted to release the new 13-inch MacBook Pro in a configuration that does not include the new OLED Touch Bar. This more traditional keyboard-equipped laptop comes standard with a slower i5 processor than its Touch Bar-equipped sibling, slower graphics and two fewer Thunderbolt 3 ports, but also with a lower price tag.

What do these new machines cost? The Touch Bar-less 13-inch MacBook Pro starts at just under US$1,500. A Touch Bar, more speed and more ports takes the total up to around $1,800. If you want a fully-maxed out 13-inch MacBook Pro, including a 3.3GHz dual-core i7 processor, 16GB of RAM, and 1TB of SSD storage (only the 15-inch model can be expanded up to 2TB of storage), your total comes to $2,900. Looking at the 15-inch model, which starts at $2,400 for a 2.6GHz i7, 16GB of RAM, 256GB of SSD storage and a Radeon Pro 450 graphics processor (2GB of VRAM), the price can climb very quick with built-to-order options. The machine's price tag reaches $4,300 with a 2.9GHz quad-core Intel i7 processor, 2TB of PCIe-based SSD storage, and Radeon Pro 460 (4GB VRAM) graphics. Despite rumors to the contrary, there is no 32GB RAM option available on any of the new MacBook Pro models. The Touch Bar-less MacBook 13-inch model is available today whereas the 13-inch and 15-inch Touch Bar MacBook Pro notebooks are shipping in 2-3 weeks but are available for preorder now. All three models are available in "space gray" and "silver" color options.

What does the new MacBook Pro and Touch Bar mean for photographers?
First things first, if you enjoyed using the SD card slot of the previous-generation MacBook Pro machines, you'll notice that it's gone. In its place are four Thunderbolt 3 ports, however, which should prove to be very versatile. After you get adapters, of course. Not necessarily convenient, but certainly powerful.

The new Touch Bar is probably the most exciting aspect of the new MacBook Pro generation for photographers. Imagine wanting to straighten out an image and being able to slide your finger on the Touch Bar to adjust the angle of your image. Or to change your tool in Photoshop. Perhaps you'll soon be able to scroll through your photo library by sliding your finger across the Touch Bar while using Lightroom. The possibilities with the Touch Bar are extensive and it will be very exciting to see how different applications utilize it following the launch of the new notebooks. In fact, Adobe came on stage at Apple's event to discuss Photoshop specifically. As Adobe's representative, Bradee Evans, said, the new MacBook Pro and Photoshop are "made for each other." She was working on an image and accessed "select and mask" right from the Touch Bar. After choosing "select and mask," the Touch Bar changed to showcase only tools required for the selection process. You can resize brushes and perform simple tasks without having to slow down. What about adding a new layer? Easy with the Touch Bar. While using the Touch Bar, you can also better utilize Photoshop's fullscreen display mode, which is usually hampered by your inability to access your tools while using the mode. It will be interesting to see what other features are incorporated when Photoshop is updated for the Touch Bar before the end of this year.

Today's Mac event follows only one day after Microsoft's Surface event. You can read all about that event here.