Previous Story Selfie and budget-friendly: Fujifilm announces the X-A10 mirrorless ILC, 16.3 megapixels and tilting display
Next Story Is your camera lying to you about highlights? Plus an excellent presentation on mastering lighting 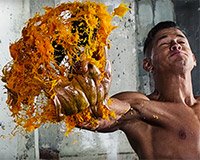 We have a couple of high speed-centric videos for you today. First up is a video from Nikon and sports photographer Tom Miles. The video below goes behind the scenes with a Nikon D500 as martial artist Tom Duqesnoy (who has the excellent nickname “Fire Kid”) smashes objects such as cakes and watermelons with his fast, powerful kicks.

The D500 proved to be an excellent tool for Miles as it allowed him to shoot at up to 10 frames per second while controlling the lighting using Nikon’s Creative Lighting System. While you can see the action below, you can also read the following posts on the project: Miles on the thought process behind the shoot, Miles’s lighting setup and Nikon’s official thoughts on the project.

While the Nikon D500 is fast, it and every other traditional camera on the market can’t hold a candle to the shooting speeds of dedicated, specialized high-speed camera equipment. We recently covered the Chronos camera, a high-speed camera with a very reasonable price tag, but there is a new video utilizing the Chronos that combines distinct camera angles with the insane capabilities of the camera. In case you need a refresher, the Chronos can shoot at up to 21,694 frames per second and costs around US$2,500.

The Chronos Kickstarter campaign was a smashing success, earning over $260,000 as of writing with over three weeks left on the campaign. Its goal was under $50,000, so you could say that the Chronos is proving very popular.

(Seen via Fstoppers and PetaPixel)

Tweet
Comment
Previous Story Selfie and budget-friendly: Fujifilm announces the X-A10 mirrorless ILC, 16.3 megapixels and tilting display
Next Story Is your camera lying to you about highlights? Plus an excellent presentation on mastering lighting