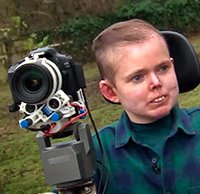 James Dunn is a 23-year-old photographer from England. He has a rare genetic disorder, epidermolysis bullosa, that prevents him from being able to use a camera in a traditional way. The condition makes his skin highly susceptible to developing painful blisters. In James' case, the condition led to his fingers fusing together, rendering him unable to manipulate camera controls.

Fortunately, the passionate photographer has been helped by the BBC program, "The Big Life Fix," and an inventor named Jude Pullen. Pullen crafted the Zocus, a 3D-printable wireless system which controls the zoom and focus of a camera lens using a tablet. You can read more about the project here. Provided you don't own your own 3D printer, you can recreate this project for around US$250 according to Pullen. A tool such as the Zocus could help a lot of people who struggle with traditional camera controls for any number of reasons to be able to enjoy photography.

To learn more about James and his story and see the Zocus in action with James' Canon 60D, watch the video below from the BBC.

James loved taking photographs, but his condition meant he could no longer operate a camera... until now. ��❤��