Previous Story 4K timelapse shot with Sony and Zeiss gear perfectly illustrates Iceland as a photographer’s paradise
Next Story With Christmas coming up, here are some easy DIY gift ideas for the photographers in your life

Safety and security issue: Over 150 photographers and filmmakers ask camera makers for encryption 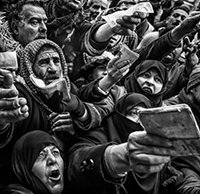 Documentary photographers and photojournalists face a uniquely high risk out in the field, and part of that is due to the lack of encryption features built into commercial cameras. As it stands now, whenever a photographer or filmmaker is stopped by police, military or other officials, the photographer has no way to protect their files. Assailants are free to destroy files and suppress the free flow of information.

In other industries, such as the smartphone industry, big technology companies have embraced encryption, protecting the security of their users. However, there is often a gap between capturing images and video with dedicated camera equipment and being able to place them on encrypted devices.

From an open letter to the major camera manufacturers, which you can read in full here: "On countless occasions, filmmakers and photojournalists have seen their footage seized by authoritarian governments or criminals all over the world. Because the contents of their cameras are not and cannot be encrypted, there is no way to protect any of the footage once it has been taken. This puts ourselves, our sources, and our work at risk."

This letter, signed by over 150 professionals, hits on many key points. Not only is there a serious risk to the flow of information and media from many of the world's most tumultuous regions, but photographers themselves face risk because criminals and officials who desire to suppress journalists are fully aware of the lack of encryption on devices and therefore are much more likely to confiscate equipment.

Per Verge and ZDNet, only Nikon has responded to the open letter, although their response is brief and doesn't include any evidence that they will include encryption in the future. Nikon said, "We are constantly listening to the needs of an evolving market and considering photographer feedback, and we will continue to evaluate product features to best suit the needs of our users." The letter was sent to Canon, Sony, Fuji and Olympus in addition to Nikon.

Readers, what is your take on the issue? Do you want future cameras to include the ability to encrypt your data?

(Seen via The Verge and ZDNet. Index image.)

Tweet
Comment
Previous Story 4K timelapse shot with Sony and Zeiss gear perfectly illustrates Iceland as a photographer’s paradise
Next Story With Christmas coming up, here are some easy DIY gift ideas for the photographers in your life