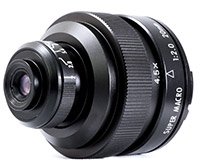 There are a couple of announcements coming out of China today as Zhongyi Optics (ZY Optics) has released a new lens and a new color for an existing lens. The new lens is sure to excite macro fans as it is an interesting new 20mm f/2 4.5x Super Macro Lens with a reproduction ratio of, unsurprisingly, 4.5:1.

The Zhongyi Mitakon 20mm f/2 4.5x Super Macro Lens is “compact in its class,” weighing only 0.5 pounds (230 grams) with a length of around 2.4 inches (6 centimeters). The lens achieves its impressive 4.5:1 reproduction ratio using six elements in four groups, although users can stack extension tubes or bellows for a resulting 13:1 magnification. Despite its low weight, the lens does have metal construction, although it is unclear how much of the body is metal. The lens includes only three diaphragm blades, does not include infinity focus and does not have a filter thread. The new silver version of the Speedmaster 35mm f/0.95 lens

(Seen via The Digital Picture and Mirrorless Rumors)