Previous Story Seeing in every direction: Sphere Pro lens lets you easily capture 360-degree photos and video
Next Story Checking color: A simple tool that will save you a lot of trouble and ensure that you capture accurate color

First contact: Brazilian photographer photographs uncontacted tribe in the Amazon from the air 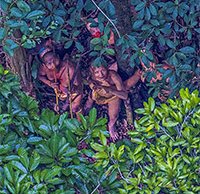 Brazilian photographer Ricardo Stuckert recently had an experience that is exceedingly rare in the modern world, the chance to view an uncontacted tribe of people. While in a helicopter trip to photograph a “contacted” tribe in the Amazon, a rainstorm caused the helicopter to take a detour.

It was on this detour over the Brazilian state of Acre, an area with strict anti-logging laws that can help preserve the way of life for Amazonian tribes which have seen their homes destroyed in much of the rainforest, that Stuckert saw a building down below. The helicopter descended and Stuckert captured a series of photographs of the people, many of whom appear frightened by the helicopter, some of them even launching arrows at the vehicle.

Of the series of images, which you can see in full at The Guardian, Stuckert said, “I took the camera and started photographing. I didn’t have much time to imagine what was happening.” His captures certainly prove that it pays to be prepared and to have your gear ready to shoot, regardless of the situation.

A photo posted by Ricardo Stuckert (@ricardostuckert) on

It is less clear how ethical it is to photograph uncontacted tribes. There are an estimated 100+ uncontacted tribes remaining on earth, says PetaPixel, and being contacted is clearly an extreme stress for some of the tribes, as is evidenced in Stuckert’s recent photos. On the other hand, an increasingly rare way of life is being documented and preserved, which certainly has some value. Readers, what is your take on the encounter?

To see more of Ricardo Stuckert’s work, visit his website and follow him on Instagram. He is currently working on a photo project documenting the lives of indigenous tribes.

Tweet
Comment
Previous Story Seeing in every direction: Sphere Pro lens lets you easily capture 360-degree photos and video
Next Story Checking color: A simple tool that will save you a lot of trouble and ensure that you capture accurate color