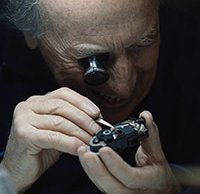 Gian Luigi Carminati has spent the vast majority of his 76 years repairing cameras in a small Milan workshop. His incredible technical skills are on display in the video below, directed by David Drills.

Over the course of Carminati’s career, he has seen photography change dramatically. When he started, he says that “35mm was all the rage.” As he continued to work on cameras, which were all film for a long time, of course, the digital age came and Carminati feared that his career would be ending. His workshop remains open, however, so his worst fears did not come to fruition. Cameras, especially older ones, can rely heavily on small, precise mechanical parts. It is Carminati’s job to fix these and as he points out, no two cameras are exactly the same.