Previous Story Canon EOS M5 First Shots: Does their most advanced mirrorless model earn high marks for image quality?
Next Story From 1897 until today, the history and technique of timelapse photography 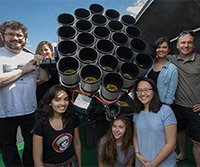 What do you get when you cluster together 48 Canon 400mm f/2.8L IS II lenses? Besides nearly half a million dollars of exotic glass, you also get an extremely powerful telephoto array which can captures images showing "extremely faint galaxy structure." The Dragonfly multi-lens array is "designed for ultra-low surface brightness astronomy at visible wavelengths" and it's an ongoing research project at the University of Toronto's Dunlap Institute for Astronomy and Astrophysics. Dragonfly started in 2003 with a mere three Canon 400mm f/2.8 lenses and has since grown to 48 of them in two clusters.

The project started when scientists were unable to observe enough of the faint structure to support Cold Dark Matter (CDM) cosmology. CDM dictates that the Universe "grows from the 'bottom up,' with small galaxies merging to form larger ones." This process leaves faint evidence behind, evidence that prior advanced telescopes were unable to detect due to scattered light inside the telescopes. Canon's nano-fabricated coatings on their newest 400mm f/2.8 optics have been able to reduce scattered light enough that Dragonfly can detect the evidence needed to support CDM. By combining many lenses together in a cluster, the team can remove even more unwanted light, resulting in an image that has previously been impossible to capture, including one of a newly-discovered galaxy, Dragonfly 44, which is 99.99% dark matter.

If you would like to learn more about Dragonfly and its discoveries, you can read about it here and also watch the two videos below.

Tweet
Comment
Previous Story Canon EOS M5 First Shots: Does their most advanced mirrorless model earn high marks for image quality?
Next Story From 1897 until today, the history and technique of timelapse photography