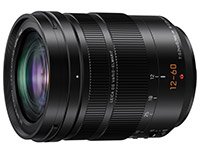 This is certainly a big CES 2017 for Panasonic! In addition to their new flagship camera, the Panasonic GH5, the Japanese company has also announced the FZ80 and GX850 cameras in addition to five lenses. Exciting times in the Panasonic camp, indeed!

We'll start with the new FZ-series camera, the Panasonic FZ80. The successor to the FZ70 has been a long time coming, but it looks to be worth the wait. It features the same 60x optical built-in 20-1200mm equivalent zoom lens, but includes a new 18.1-megapixel sensor. The FZ80 also includes a wide array of 4K video and photo recording modes, making it a very capable multimedia camera for its roughly $400 price tag. The FZ80 will be released in March and you can learn much more by reading our Panasonic FZ80 Overview. Next up is the Panasonic GX850. This sleek, stylish selfie-friendly camera is a compact mirrorless model capable of shooting images at up to ISO 25600, and it can also record high resolution 3840 x 2160 4K video at up to 30 frames per second. The 16-megapixel camera offers the full range of Panasonic's 4K Photo modes as well, including 4K Burst and Post Focus. The GX850 will be available in early February for just under $550. Read our Panasonic GX850 Overview to get all the details! Now we'll move on to the optics. There are four lenses which are being refreshed with the latest technologies, including Power O.I.S. to help you capture sharper shots at slower shutter speeds while handheld. All four lenses are compatible with Dual I.S., 5-axis Dual I.S. and 5-axis Dual I.S. 2 systems when mounted to compatible cameras. The lenses utilize inner focus drive system autofocus and a new micro-step drive system aperture control, meaning that they are well-suited for recording video with quiet AF performance and smooth brightness transitions when zooming. Further, the lenses are equipped with a new exterior finish.

The refreshed lenses are as follows:

And it isn't simply refreshed lenses that Panasonic has announced. They have an all-new addition to their lineup, the Leica DG Vario-Elmarit 12-60mm f/2.8-4.0 ASPH. Power O.I.S. lens. The 24-120mm equivalent lens offers a versatile 5x optical zoom design, making it suitable for a wide range of photographic situations, from landscapes to portraits and more. The lens features 14 elements in 12 groups, including four aspherical lenses and two ED lenses that are designed to help achieve excellent image quality. The included Power O.I.S. stabilization system, which is compatible with Dual. I.S. 2, makes the lens more useful in low-light situations.

Image shifts during zooming can be frustrating, particularly when recording video, so Panasonic has designed the 12-60mm optic to have "exceptional barycentric stability," meaning that the camera will have minimized image shift. To help deal with brightness changes when zooming or panning, the lens also has a micro-step drive system in the aperture control section. Further, the inner focus drive system is said to be silent, perfect for using autofocus during recording. This lens is the first in Panasonic's Leica DG Vario-Elmarit f/2.8-4.0 series, but Panasonic has announced two more lenses which are presently under development. There is an 8-18mm wide angle zoom and a 50-200mm telephoto zoom lens, both f/2.8-4.0 optics. Pricing is currently listed at US$997.99 and the scheduled availability is anticipated for the end of March 2017.