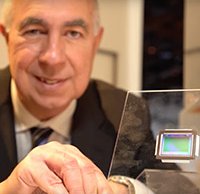 In 2015, Canon announced that they were working on a 250-megapixel APS-H CMOS sensor. The sub-full-frame sensor packs 19,580 x 12,600 pixels on its 29.2 x 20.2 millimeter surface, offering a pixel density of 418,000 pixels per square millimeter. Per Canon’s press release at the time, even the low-light and high ISO performance of the sensor was supposedly on-par with modern consumer cameras despite the high pixel count.

At the time, Canon said the sensor wouldn’t find its way into any consumer cameras anytime soon. Is that still the case? Photo Gear News chatted with Canon’s Chuck Westfall at CES 2017 about the 250-megapixel sensor, which was on the show floor this year.

As you can hear in the video above, it is still very much an experimental product, but Canon hopes it will help push the boundaries of imaging and sensor technology. Due to its insane megapixel count, the sensor can create a Full HD frame from an area as small as 1/120 of the entire 250-megapixel frame. This has very clear uses for wide-area surveillance, as Westfall says, and has generated interest in that industry.

While it’s unlikely that consumers would be able to get their hands on a 250-megapixel sensor for capturing stills images anytime soon, such as in a new Canon EOS camera, it is nonetheless interesting to hear that Canon continues to work on the sensor and hopefully some of what they learn during development trickles down to products we could get our hands on in the future.