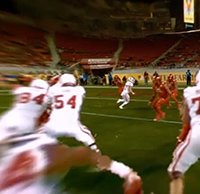 There are few sporting events that create as much buzz as the Super Bowl. This year’s edition, Super Bowl LI, will be broadcasted on FOX. FOX Sports has announced that they will be utilizing an array of interesting camera technology for the big game, including field-of-vision perspective.

Teaming up with Intel, FOX Sports Lab will use what they call “Be the Player,” which is a camera angle that shows a “POV perspective from any player on the field without ever having a physical camera attached to the player.” This works by utilizing the many cameras that are stationed around the stadium and creating a “virtual camera” at the eye line of a specific player. As FOX Sports points out, it’s not unlike the camera freedom you would have when playing a video game. Similarly, there is a lot of computing power behind the “Be the Player” camera, which you can see used in a college football game earlier this season below.

FOX Sports isn’t only utilizing the POV camera technology, but it is also going to use more Super Motion and 4K cameras than they have ever used for a broadcast before. The game itself will be covered by more than 70 cameras, requiring the use of three production trucks. Of their coverage, FOX Sports SVP Graphic Technology and Innovation says, “We, as broadcasters, are always trying to provide the viewer with something they’ve never seen before. With this new ‘Be the Player’ technology, it is now achievable and we are incredibly excited to debut this at the Super Bowl on FOX.”

Super Bowl LI isn’t the first time FOX has leveraged distinct camera equipment and technology to cover sporting events. In 2016, they used aerial production drones at the U.S. Open Championship and delivered virtual reality broadcasts of over a dozen sporting events, including a Premier Boxing Champions bout, Bundesliga soccer match and the Daytona 500, among others. The broadcast company was also the first to offer POV camera angles from GoPro cameras strapped to the hats of on-field referees during the Big Ten Championship football game in November.

As camera technology continues to develop, sports viewers will certainly benefit. We don’t know which teams will be facing off in Super Bowl LI, although we will see four teams fall out of contention for the opportunity this weekend, but we do know that we will see the game in a very distinct way come February 5.