Nikon KeyMission 360 takes D.C.: Inauguration to be livestreamed in VR and 360-degree video 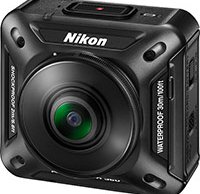 The upcoming US Presidential Inauguration on January 20 is an important event in American history for many reasons, not the least of which is that it will involve the swearing in of the 45th President of the United States.

USA Today has announced that they will be marking the occasion by live streaming the inauguration in 360-degree VR. The media company will utilize a customized Nikon KeyMission 360 camera as part of their weekly VR show, “VRtually There.” This will be the first livestream content produced by USA Today for the show, which has seen over five million views since launching in October 2016.

The livestream will be viewable in VR headsets via the USA Today channel in the YouTube application and available in 360-degree format via the same channel for desktop and mobile users. The stream will begin at approximately 9:30 A.M. EST on January 20. Of the event, Russ Torres, Vice President of Video Content for USA Today Network said, “We’re excited for the next iteration of our VR storytelling with the livestream of the presidential inauguration. We believe that VR offers a unique storytelling ability, and we will continue to provide our readers with the opportunity to experience events such as the inauguration like never before.”