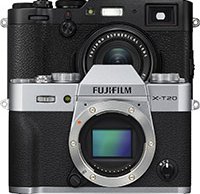 Alongside the official announcement of the new medium format Fuji GFX, Fujifilm has also announced updates to a pair of their APS-C X-Series cameras, the Fuji X100F and Fuji X-T20. These refreshed models not only get some  which are both centered around 24.3-megapixel APS-C X-Trans CMOS III image sensors.

First up, the Fuji X100F is the successor to the X100T and features the same unique Advanced Hybrid Viewfinder and fixed 23mm f/2 prime lens, which provides a classic 35mm-equivalent field of view. The main upgrade to this fourth-generation model is the new 24.3-megapixel X-Trans CMOS III sensor, similar to the one inside the X-Pro2 and X-T2. The X100F body also includes numerous improvements, including upgrades to the Electronic Rangefinder mode of the hybrid viewfinder. Users can now change the magnification of the EVF in the optical viewfinder. Further, the EVF framerate has been increased to 60 frames per second. The rear of the camera body has also seen other improvements, including a redesigned layout which now places the most frequently-used functions along the right side of the camera.

Autofocus performance and speed are said to be improved with the X100F thanks to its new autofocus system, which includes 91 focus points compared to the 49 found in its predecessor. The camera also adds a new ACROS film simulation mode that's said to offer smooth gradation and deep blacks. Following up on the X-T10, the Fuji X-T20 shares the same retro style but includes many under-the-hood improvements, including a new 24.3-megapixel sensor (like the X100F above) and new processor.

Thanks to the new hardware, the X-T20 can shoot images across an ISO range of 100-51200, 200-12800 natively. Further, continuous shooting speeds have been improved up to 14 frames per second when using the electronic shutter and buffer depths have been dramatically increased. Start-up time has been reduced too. The X-T20 also includes a new autofocus system, like the one found in the new X100F, which in addition to reworked AF algorithms, should offer faster, better autofocus, particularly with regard to moving subjects. Video shooters will be particularly interested in the X-T20 as it now offers 4K UHD video recording at up to 30fps with a bitrate of 100Mbps. Maximum clip length is only 10 minutes for 4K UHD video, but the X-T20 includes a number of interesting video features, including clean HDMI output.