Previous Story Women in photography: A look at female creators and the challenges overcome by women in the industry
Next Story Smarter selections in Photoshop: How to make clean selections and improve your photo editing 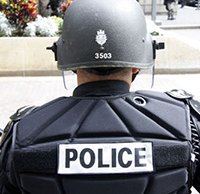 A veteran photojournalist based in Washington D.C. has been awarded a settlement of $45,000 in a lawsuit against Maryland police. Mannie Garcia was arrested in 2011 in Montgomery County, Maryland for recording what he perceived to be an instance of excessive force being used by police against two men. Garcia, his wife and a friend were leaving a restaurant and saw two men being arrested and Garcia began capturing photos and videos of the incident. Police approached Garcia, questioning him, at which point Garcia identified himself as a member of the press. Nonetheless, Garcia was arrested.

Garcia alleges that the arresting officer put Garcia in a chokehold before dragging him across the street to the police cruiser. Garcia alleges also that he hit his head during the arrest. He was charged with disorderly conduct and lost his White House press credentials because of the arrest. During his trial in December of 2011, Garcia was acquitted but his memory card was not returned. A year later, Mannie filed a civil claim in federal court on the grounds that his First, Fourth and Fourteenth Amendment rights were violated. Garcia’s lawsuit claimed that he had been wrongfully and violently arrested.

In 2013, Montgomery County filed a motion to dismiss the case, but the U.S. Department of Justice argued on Garcia’s behalf. While the legal proceedings were ongoing, the Montgomery County police department changed its policies on people recording police activity on public property, reiterating that people have the right to capture images and video of officers. This policy is in line with several cases resolved in courts around the country, which have by and large ruled in favor of civilians’ First Amendment rights to record police on public property, provided they are not interfering.

In addition to the $45,000 settlement awarded to Garcia only days before the long-running case was scheduled for trial, he will be compensated for legal fees. While Garcia’s case did not have a groundbreaking result, it is important that police are held accountable for violating the rights of citizens. This latest settlement, in addition to the updated policies in Montgomery County, are certainly a win for photojournalists and other citizens.

Tweet
Comment
Previous Story Women in photography: A look at female creators and the challenges overcome by women in the industry
Next Story Smarter selections in Photoshop: How to make clean selections and improve your photo editing