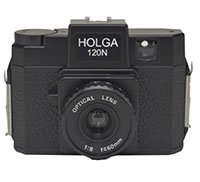 In 1981, the original Holga camera was introduced in China, offering an inexpensive 120 film format camera for a market clamoring for more affordable photography. Only a few years later, however, 35mm film took over the Chinese market and Holga was in trouble. Fortunately, Holga took hold in western markets where people were demanding the all-plastic “toy” camera. In 2001, Holga passed the million cameras sold mark. A decade later, the company celebrated its 30th anniversary. But the Holga 120N camera, a successor to the original Holga 120S, was nowhere to be found.

Gone no longer, the Holga 120N will be making its return this summer for just under US$40. The old molds for the original 120N camera have been tracked down by Freestyle Photographic Supplies and they expect to receive new Holga 120N cameras in early July.

The Holga 120N plastic medium format camera is not a sophisticated piece of technology, nor is it capable of sharp, near-perfect images. But its simplistic lens – prone to vignette and other issues – is part of its charm.

Between Kodak bringing Ektachrome back from the dead and the Holga 120N making a return, it appears that film’s resurgence will continue in 2017.