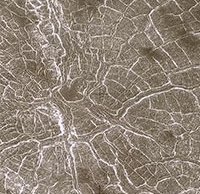 Finnish photographer and videographer Jan Fröjdman has a wide array of interests including nature, design, hot-air ballooning, but he also enjoys astronomy and space. Enter NASA’s High Resolution Imaging Science Experiment (HiRISE) and it’s a match made in heaven. NASA produced high-resolution stereo images of the Martian surface over the past 12 years, capturing a total of 50,000 images, which can be viewed by anyone with special glasses in 3D. Fröjdman transformed the HiRISE images into a dynamic 3D view of Mars that does not require 3D glasses to enjoy.

The video seen below took considerable time and effort to create for Fröjdman. He had to manually pick reference points on the anaglyph image pairs and he chose 33,000 reference points for this project. The original images are also grayscale, so Fröjdman color graded them based on NASA’s research, opting to use a subtle touch. It took him three months in total.

Fröjdman remarks, “In this film I have chosen some locations and processed the images into panning video clips. There is a feeling that you are flying above Mars looking down watching interesting locations on the planet. And there are really great places on Mars! I would love to see images taken by a landscape photographer on Mars, especially from the polar regions. But I'm afraid I won't see that kind of images during my lifetime.”