Utilizing city lights: How to shoot portraits at night without extra gear 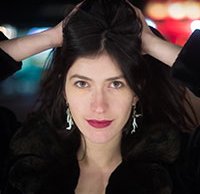 Shutterbug and photographer Jordan Matter have started a new collaborative video series in which Matter, a New York Times best-selling author and photographer, will share tips and tricks for fellow photographers. The series is cleverly titled “Tips that Matter.” The first video in the new series has been released and focuses on shooting portraits at night with minimal gear.

You don’t need to carry lighting gear with you to shoot at night. You can use streetlights as your lighting source, but you have to ensure your model looks up toward the light, otherwise the light will be coming directly from above and illuminate only your model’s nose; that’s never a flattering look. It can be difficult for your camera to focus in low light, but Matter advises to just keep firing away.

What if you want to have your model looking directly at your camera? Look for a large storefront window, which can act as a massive softbox. Granted, it’s not as bright as studio lights, so you need a fast lens. Matter says you ideally want to shoot with an f/1.4-2.0 lens. The faster, the better.

To see the rest of the tips, be sure to watch the video above. Stay tuned to Shutterbug’s YouTube channel for more “Tips that Matter” videos from Jordan Matter.