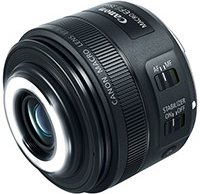 Canon released the PowerShot SX720 HS last year, a highly pocketable camera that paired a 24-960mm-equivalent lens with a 20.3-megapixel sensor. Canon has announced its successor, the PowerShot SX730 HS, which shares many features with its predecessor but adds a few new tweaks, including a tilting display, redesigned controls and Bluetooth connectivity, all while maintaining the same compact form factor. You can read more about the new camera here in our Canon SX730 HS preview. The camera is set to go on sale in June for around $400. Canon has also announced a new macro lens addition to their series of EF-S lenses, the Canon EF-S 35mm f/2.8 Macro IS STM. The macro lens is the widest macro lens in their APS-C-specific lineup and is designed for entry-level and advanced amateur DSLR photographers.

The lens offers a 1:1 maximum reproduction ratio and includes a 7-blade rounded aperture diaphragm. The aperture range is f/2.8-32. Inside the lens, there is also a new glass molded (GMo) lens element. In total, there are 10 elements in 6 groups. The lens weighs in at a lightweight 6.7 ounces (190 grams) and is compact, with a maximum diameter of 2.7 inches (69.2 millimeters) and a length of 2.2 inches (55.8 millimeters). The lens takes a 49mm filter. In addition to its unique focal length, the new macro lens is also the first in the series to include built-in LED Macro Lites on each side of the lens, which allow users to control lighting on the lens itself without the need for additional external lighting equipment. The LEDs had adjustable brightness levels and can also be controlled independently. Given the need to have the LEDs consistently located, the front element doesn't rotate thanks to the internal focusing design. The new lens includes Macro Lites, which are two LEDs, one on each side of the lens. The power of each light can be controlled independently.

To read more about the image stabilization-equipped wide-angle macro lens, see our landing page for the Canon EF-S 35mm f/2.8 Macro IS STM. The lens will be released this June for around US$350.