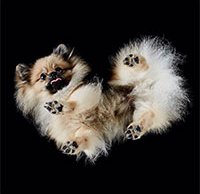 Lithuanian photographer Andrius Burba made a name for himself with his “Under-Cats” project. Some people consider themselves bigger fans of dogs, so Burba and his team have followed up “Under-Cats” with “Under-Dogs.”

Like “Under-Cats,” the canine photo project captures photos of man’s best friend from beneath, showing dogs in a new, distinct angle. To capture the photos, Burba used a Canon 5D Mark III with a Sigma 35mm f/1.4 lens. His lighting setup involved a pair of Profoto Prohead Plus lights with Profoto 3 x 4 softboxes.

Burba told DIY Photography about the challenges of photographing dogs for his project, “I needed to order bigger and stronger glass for heavy and big dogs, because cats were lighter and smaller. So I made a glass table for this photo shoot. Preparation was most difficult part. Also, I learned two main things from these photo shoots. First, cats think they are gods, since people feed, love and give them homes. Secondly, dogs see human as a god as they feed, love and give them homes. Probably you had to read that twice.”

Burba continued, “[compared to working with cats] dogs were more obedient; they liked treats, so we played with them. This is how we got more interesting poses, than cats. Cats were very cute but dogs are more playful. Dogs are more obedient which helps us to create more interesting shots. While some dogs were playful on the ground they have completely changed on the glass and stood still like a rock. Others weren’t afraid of standing above which was easy and fun to work with.”