16 cameras in your pocket: Light L16 camera and its fascinating tech will be reaching consumers soon 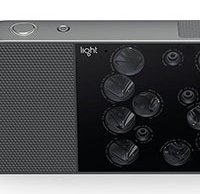 Smartphone photography is incredibly popular in no small part due to the convenience of capturing shots with a camera you can keep in your pocket. This convenience typically comes with a tradeoff – granted, one that seemingly gets smaller every year – in terms of image and optical quality. For many users, a phone’s camera is sufficient, but for many photographers, capturing shots with your phone feels like a compromise and it is difficult not to wonder, “How much better would this shot be if I had my dedicated camera gear?”

Enter Light’s L16 camera, a product many years in the making which hopes to put a powerful, versatile camera in your pocket. If this name sounds familiar, it should, as this product has been in development for years. The Light L16 camera leverages 16 separate 13-megapixel camera modules at different focal lengths, which can computationally fuse separate images together to create a final 52-megapixel image file. As you can see in the image above, the Light L16 is one interesting-looking piece of tech. What you’re looking at is six 150mm f/2.4 telephoto lenses, five 70mm f/2 lenses and five 28mm f/2 lenses. It has a flash and a laser-based focus assist module in the mix too. It looks like a futuristic camera and the wait is almost over as Light has announced the first L16 orders will start shipping on July 14, 2017 (although that first batch is sold out).

The L16 looks much like it did a couple years ago, with small tweaks here and there, but it absolutely retains its minimalist design and sleek appearance. It is constructed from die-cast aluminum alloy and has a rubberized non-slip grip with a lanyard connection. The rear of the Light L16 is dominated by a 5-inch FHD touchscreen display and the camera comes with 256 gigabytes of onboard storage. It records its up to 52-megapixel images in JPEG, TIFF and DNG file formats. Imaging specifications include a shutter speed range of 15 seconds to 1/8000s and a native ISO range of 100-3200. The camera includes tap to focus, auto and manual exposure modes and a standard suite of metering modes including center-weighted, spot-weighted and spot.

The L16 runs on an Android operating system powered by a Qualcomm Snapdragon chip set and includes a 3900 mAh lithium-ion battery and built-in GPS, Wi-Fi and Bluetooth. It can also record 4K video with any of its three focal lengths. For the full list of specs, see here.

Back in April of 2015, our editor-in-chief Dave Etchells had a conversation with Light co-founders Dr. Rajiv Laroia and Dave Grannan, the CTO and CEO respectively of Light. This conversation spanned a variety of topics, including the history of Light, the L16’s technology and where the duo saw the future of photography going. You can read that interview in full here. A few months later, Etchells spoke with Laroia and Grannan again, this time discussing additional funding the company received and how their tech was progressing.

Back then, we were promised DSLR quality images in a form factor not unlike that of a phone. While we still don’t have our hands on a Light L16, you can take a look at images captured using the device here and judge for yourself how the L16 compares to your DSLR (and mobile phone).

It looks like a promising device and it is certainly an intriguing camera with a lot of interesting technology packed in its aluminum chassis. Unfortunately, if you want one this summer, you’re out of luck, but you can sign up to order a Light L16 as soon as the first batch of orders are fulfilled here. SLR Lounge is reporting that the estimated price of the Light L16 will be just under US$1,700, so you’re getting well into premium compact camera prices and beyond. The L16 hopes to offer more versatility and quality than your standard compact camera in an even smaller form factor, but whether this lofty goal can be met remains to be seen.