Previous Story Panasonic GH5 Field Test Part III: Dynamic range, 6K photo and timelapse and the final wrap-up
Next Story The pursuit of truth in portraiture: An interview with the photographer Platon 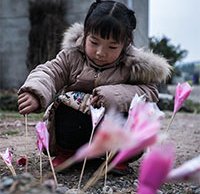 Photography is hugely popular in China, especially among the younger generation who were born during and after the 1980s economic explosion in the massive Asian nation. The country remains an interesting society with respect to freedom of expression and how photographers share their work and stories. TIME has identified nine Chinese photographers – all under 35 years old – you should be following.

One of the photographers, Yuyang Liu, has been spending the past two years photographing the results of the Chinese government’s initiative to send Muslim-Uighur youth from their western China region to work in southeastern factories – an initiative Liu is exploring to understand “the possibility of solving a tense social problem with an economic solution.”

Another photojournalist, Pinglang Zhou, works for an English-language news site in Shanghai, Sixth Tone, and documents young adults from China’s impoverished regions. Xiaoxhiao Xu is another young photographer looking to share stories from China’s many villages where opportunities may not be as abundant.

To see the other six young Chinese photographers whose work you should check out, see TIME’s article here. There are many incredible images and stories being shared from all over the world, but it can be difficult to hear about many of them, especially those from halfway across the world.