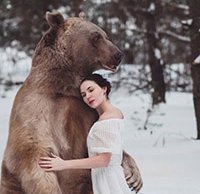 The surreal photographic work of Russian photographer Olga Barantseva showcases models posing with a variety of animals, often a massive, seven-foot brown bear. The bear's name is Stepan and he was found, orphaned and starving, when he was three months old. Now 20, Stepan was never able to be released back into the wild after being raised by a circus trainer. This should be obvious, but do not ever approach a bear, Stepan is likely the only one willing to pose with you.

Olga Barantseva's path crossed with Stepan's a few years after she took up photography. Barantseva picked up her first camera in 2007 and in 2012 she began photographing models with wildlife in a forest near her Moscow home.

Barantseva told PetaPixel, "Photo sessions with animals have become quite popular. Almost any animal or bird, or even a reptile can be found on rent for photography and a lot of photographers use them. I’m no exception…Mainly I’m interested in creative portraits. I have an interest and passion for creative photography."

For much more on Olga Barantseva and her work, read PetaPixel's coverage here. You can view additional images here at her website and by following her on Instagram.