Thrifty Thursday: Save big bucks on cinema lenses, lighting and cameras from Canon, Nikon and Sony 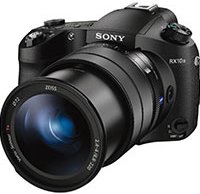 To celebrate NAB Show, which closes today in Las Vegas, B&H has a huge amount of ongoing specials on video, lighting, audio, photo and computer equipment and gear.

If you’re looking to get started shooting video with your DSLR or mirrorless camera, you might want a cine lens or two, right? How about four cine lenses for well under $2,000? Rokinon’s popular Cine DS lenses are available in four-lens bundles for between $1,650 and $1,800. The bundles come with 20mm or 24mm, 35mm, 50mm and 85mm Cine DS lenses designed to cover full-frame sensors. The savings vary depending on the bundle and mount selected, but in some cases range from just under $500 to around $700.

When switching lenses for shooting video, you need to consider exposure and color changes, but the quartet of lenses share the same exposure range and similar optical construction, including multi-layer coating to help prevent glare. Industry standard focus and iris gear rings are in the same position on all of the lenses, helping ensure you never miss a shot because of unfamiliarity with the lens. The focus and iris are manual and the iris ring is declicked to allow for smooth iris pulls during recording. If you’re interested, click the links below to your lens bundle and mount of choice. Keep in mind that these deals won’t last long; they end on April 30 at 11:59 PM EDT. Save 5% on DJI drones

By using the coupon code “BHNAB17” you can save 5% on a variety of DJI drones. It isn’t a huge amount of savings, but if you’ve been waiting to pull the trigger on a DJI drone, now is as good a time as any. Click the links below to see the DJI drones you can save 5% on: Light your shots for less, save on lighting gear

It isn’t just video shooters who use continuous lighting, some photographers enjoy working with it as well. No matter what you’re using it for, B&H has it on sale.

You can save up to $460 on Dracast LED Fresnel lights, including getting a Dracast Fresnel 700 Daylight LED Light for $795, which is a savings of $460. Perhaps you’re looking for something from Light & Motion, who we covered for their new Elinchrom Skyport-compatible Stella Pro lights earlier this week. You can save up to $980 on Light & Motion gear this week. If their powerful lights and kits are overkill for your needs, there’s a $100 instant savings on their Stella 1000 LED light, now available for just under $400.

Save up to $800 on cameras from Canon, Nikon and Sony

We have a lot of deals to cover in this section, so I’ll get right to it. The four Canon deals below all come with free items including: SanDisk 64GB SD card, a Lowepro backpack and an external 4TB hard drive from Western Digital. Plus, there are instant savings on top of the free items! Not to be outdone, there are similar storage kit deals on Nikon cameras, although they don’t come with the Lowepro backpack. However, the instant savings are even higher on the Nikon DSLRs: While it doesn’t come with the same storage kit, you can also save $470 on a Nikon D500 with 16-80mm lens kit that comes with a free extra battery, a shoulder bag and a 64GB memory card.

Worry not Sony shooters, there are deals for you this week too.

Save $200 on Sony Cyber-shot RX10 III: With free 64GB memory card and holster-style camera bag or in a Deluxe Kit with a memory card, extra battery, filter, holster bag and extended warranty