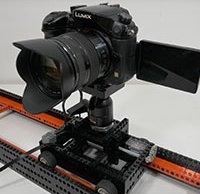 If you love photography – and I think you do if you’re reading this – and also LEGO bricks, then you will thoroughly enjoy what Dutch filmmaker Victor Bart has created.

Bart built not only a camera slider track, which is just over 45 inches (115 millimeters) long, using LEGO bricks, but also the dolly and the remote. Unsurprisingly the slider track has a few bumps due to the joints between LEGO bricks, but the dolly runs quite well with its LEGO bricks and rubber tires. The controller uses LEGO Technic parts and the speed controller from a LEGO train set, which includes a power adapter and a knob for controlling movement direction and speed.

On the camera slider rig is a Panasonic GH3 with a 12-35mm f/2.8 lens mounted on a ballhead – which comprise the only non-LEGO parts. As for the bumps in the track, Bart says that the GH3’s image stabilization handles that well. See the awesome toy slider in action below.