Previous Story Shutter Release: How good is the Sony A9 eye AF? And ten commandments of retouching and more
Next Story All grown up: Rugged Olympus TG-5 gets dual quad CPU and an inoculation against megapixel madness

Lucky Leica: Reddit user has a thrift store visit for the ages, finds a classic Leica for only $5 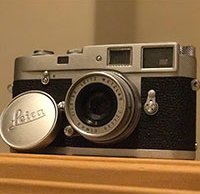 Have you ever had a great thrift store find, a deal so good or an item so rare you simply cannot believe it? Reddit user GreenteaBanana had one of those experiences recently when he found a Leica M2…for $5. Not only that, but the M2 came with an Elmar 50mm f/2.8 lens.

GreenteaBanana is a veteran thrift store shopper, but this is his best find ever. He says in the Reddit comments section, “By far the best and most valuable thing I've found in years of thrifting. In case anyone is wondering the camera is in excellent condition and the body is worth about $850 while the lens adds another $600-800 in value. I've always checked through old cameras and wondered if one day I would ever find a Leica and here it is!”

While he might decide later to sell the camera and make a very nice profit, he will be traveling in Korea and Japan this summer and will take the M2 on his trip. He says he enjoys photography, so he certainly appreciates his incredible find.

He told PetaPixel the entire story, but basically he received a dollar from an activist group in exchange for watching a four-minute video, which he then spent at a scratch lottery ticket machine. He won $10 from the ticket – the beginning of a string of good fortune – and then went to a local thrift store, Value Village, to look for items to resell online for profit. While perusing the cameras, he saw a Leica lens cap and couldn’t believe his eyes. He grabbed the camera, trying not to cause a commotion, used his lottery winnings and checked out. That’s quite the day!

Tweet
Comment
Previous Story Shutter Release: How good is the Sony A9 eye AF? And ten commandments of retouching and more
Next Story All grown up: Rugged Olympus TG-5 gets dual quad CPU and an inoculation against megapixel madness