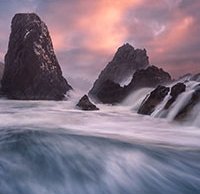 Get your weekend started off right with this collection of useful tutorials, interesting videos and industry news.

Photographer Greg Benz creates a lot of excellent tutorials on his YouTube channel and his latest video is all about exposure blending to create amazing seascape photographs. Aligning images shot along the coast can be tricky, but Benz has an awesome tip for how to perfectly line up your images by using the difference blend mode. Further, he shows you how to seamlessly blend exposures with the use of masks and the brush tool. If you’ve ever wanted to learn more about exposure blending in Photoshop, even if you aren’t shooting seascapes, be sure to watch the video below. And stay tuned to Imaging Resource in the coming weeks for my review of Greg Benz’s Lumenzia Photoshop panel.

The Strobist recently sat down with portrait photographer Greg Heisler at an event and some excerpts from the conversation are included in a new Lighting 103 post. You should click there to read the full article, but the topics of discussion included the importance of color and light, particularly in the context of non-white light. As Heisler put it, “The imperfectness of it [light] is what’s good. And I think what’s boring about photography and color when you’re doing portraits, is that people are just like, pink or brown or whatever they are. And it’s just, like, [whacks the table] a thing….And that was always just unsatisfying to me. So what I wanted to do was try to create that light where the color had a depth to it, and other sources were not seen but implied. Like there’s lighting coming from someplace else. We don’t know what it is, or where it is. But there’s this richness that actually makes it seem like a real moment; a real-life environment.” There are a ton of great quotes from Heisler in the article, so if you’re interested in lighting and portraiture, you owe it to yourself to read the article.

Can Google remove unwanted objects from your photos? – PetaPixel

While Google basically only teased a new content aware fill feature at its I/O 2017 event, they did show it in action, which you can see in the GIF below. We don’t even know how this product will eventually be released to the public, although likely through Google Photos. Nonetheless, it looks powerful.

We’ve covered the work of Mathieu Stern on numerous occasions. He’s perhaps best known for making videos about weird lenses he’s adapted to his mirrorless cameras. He’s at it again with a new video about a Componar 75mm f/4.5 lens which has a built-in square aperture. See what this weird lens can do below.

Knots are not a topic which comes up often here, if they ever have before, but cinematographer Mark Vargo wants you to know about four essential knots which every filmmaker – or photographer – must know. Watch and learn.

How to color landscape photos in Photoshop – Photography Bay