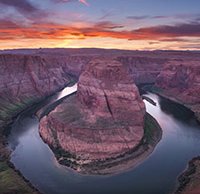 How to capture great shots of your dog - Amateur Photographer

Over the weekend, Amateur Photographer published this neat guide for learning to capture great dog portraits. If you want an awesome shot of Spot, read the article. It includes tips on how to capture the character of your dog, advice for capturing sharp shots and even how best to photograph black dogs, which are particularly tricky subjects. I captured this portrait of my late dog a few years back. Her black coat was a challenge.

Travel photographer Elia Locardi recently took the Fuji GFX 50S and the soon to be released Fuji GF 23mm f/4 R LM WR lens to famous Horseshoe Bend. The video below is part of Locardi's Photographing the World tutorial. It's rare to get over an hour of free content like this, so if you don't have the time to watch it now, bookmark it! It's educational and features beautiful imagery.

Drone hobbyist John Taylor filed a claim against the Federal Aviation Administration (FAA) in 2016 claiming that the FAA didn't have the authority to force him to register his drone. A federal appellate court in Washington D.C. ruled in favor of Taylor. While commercial users are still required to register their drones and all rules governing the use of drones remain in place, you no longer must register a drone for personal use.

We finish today's Shutter Release on a sad note. Photojournalist Stanley Greene has passed away in Paris, France at the age of 68. Greene was a founding member of Noor Images, an organization dedicated to documenting civil unrest, political issues, environmental causes, war and much more.

Stanley Greene was a member of the Black Panthers and an anti-Vietnam War activist in his younger years. His willingness to rebel against the establishment was evident in his life's work. He described his job as a journalist in this way to The New York Times in 2010, "You want to sit there comfortably with your newspaper and blueberry muffin, and you don’t want to see pictures that are going to upset your morning. That is the job of a journalist, to upset your morning.”

I urge you to read the full article about Mr. Greene and his passing here, but I will leave you with this excerpt, "Mr. Greene’s commitment to telling the unvarnished truth extended to his assessments of the ethical questions facing photojournalism. He railed against the use of computer programs like Photoshop to alter the scenes of news images, a practice that he said turned photos into “cartoons.” And he scorned photographers who staged images in an attempt to recreate a missed moment after arriving late to a news scene.