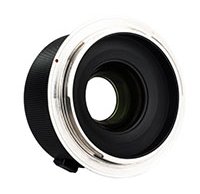 There are already many adapters available for the Fuji GFX 50S, including offerings from Fotodiox, Kipon, Cambo and more. However, none of them do what Laowa’s new Magic Format Converter (MFC) does. Traditional adapters simply acts as a means for converting lenses with different mounts to the GFX, but this leads to vignetting when using a full-frame lens because it can’t cover the sensor area of the medium-format GFX. The MFC, on the other hand, includes internal optics and magnifies the image circle of Canon or Nikon full-frame lenses to cover the GFX sensor and eliminate vignetting. Laowa states that it’s the world’s first Fujifilm GFX adapter with optics inside for adapting Canon and Nikon lenses. Although it’s important to keep in mind that the GFX, as a medium format camera, has a focal length multiplier itself of 0.79x. Let’s do some quick math. Suppose you take Laowa’s 12mm f/2.8 lens and adapt it to the GFX using the Laowa MFC, the MFC increases the focal length of the lens to around 17mm (12 times 1.4). However, because the lens is being used on the GFX, its effective focal length is equivalent to just over 13mm (16.8 times 0.79). The effective aperture is f/4, meaning that the adapter 12mm f/2.8 lens is acting like a 13mm f/4 lens on the GFX (in 35mm terms). If you have trouble reading the small text in this image, click here to see it larger.

Laowa has also shared sample RAW files of images captured using the MFC with their own 12mm f/2.8 Zero-D and 105mm f/2 STF lenses, which can be downloaded and viewed here. We hope to get our hands on Laowa’s Magic Format Converter as soon as possible to try it for ourselves, but the samples Laowa has shared look promising.